Back in November, we (Kea and Melissa) got to hang out with the super kids at two elementary schools in Waldwick, NJ. We challenged them to come up with a character who was 'three-dimensional'. That is, they created a character and revealed it to us through physical appearance, what the character allows others to know about himself/herself, and who the character was deep down on the inside. We received some super responses! Here is one of our favorites: 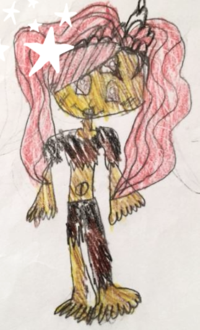 If you happen to be weird, clumsy, or corny, Doof might just be a good friend for you, since those are traits he likes in his friends. Although, he also likes the lazy, jealous, and stubborn type. Then again, his best friend is a dead frog, so any competition for his friendship couldn't be all that tough. Doof, an alien, is a bit confused, it seems. In fact, he's downright eccentric! For one thing, he does an awful lot of screaming (mostly at worms), will scream in a crisis, and well, it's his greatest talent. Now Doof might not be the most honest being you could meet, but he does have a lot of courage--unless he runs into Mr. Pickle Green Dude Man. What does all that screaming have to do with courage? It sounds like he just enjoys the screaming!

Doof's likes and dislikes really exhibit the fact that he is not of this Earth. He has a pepperoni as a pet, only reads books with two pages, hates eating pickles, but loves goat eyeballs. His most prized possession is an old gym sock, and his greatest wish is to have just one extra sock. Does he have anything in common with Earthlings? Well, he really would love to fly, and he does like jazz.

Truthfully, even Doof thinks of himself as a weirdo. Maybe even he realizes that there is something a little 'off' about living in a porta john? Perhaps the most telling trait on Doof's bio is that when people meet up with him, they say, "Mom, thank you for taking care of me!" So maybe that could be the crux of Doof's story? Maybe he needs someone to take care of him? Watch over him? Someone to look into his big hazel hump-shaped eyes and ask him how he got the scar across the third eye on his forehead? Maybe Doof isn't very honest because he's still trying to figure out truth on this big blue marble. It seems to us that Ayla has a great opportunity here to write a tale about love and acceptance. Now, we're not sure why Doof's biggest weakness is paper, but we bet that point can be worked into a bit of adventure in the middle of a Doof tale!

Thanks so much for sharing the lovable Doof with us, Ayla! And extra props for spelling Supercalifragilisticexpialidocious!

A great drawing by Ayla!